By: Myles Power Edited by: Hannah

I recently sat down and watched the 2012 anti-GMO documentary "Seeds of Death: Unveiling the Lies of GMOs". The documentary was written, produced and published by Gary Null (an alternative medicine promoter who was once almost killed from one of his own supplements) and claims to expose the dangers of genetically modified foods. It consisted of interviews from apparently "leading" scientists, physicians, professors, attorneys. Most of which, for some unknown reason, are shot in front of a green screen with rather boring backdrops added in post-production. 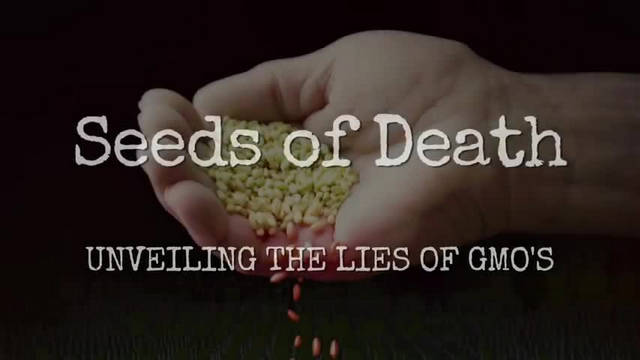 Like nearly all other anti-GMO documentaries, it's full of the same scientifically inaccurate statements that we have seen a thousand times before; Roundup ready crops produce Roundup, the bT endotoxins are harmful to humans and GM-food has been shown to produce tumours in rats. All of these ideas can be disproven by a quick Google search or by reading the source material. The documentary also included some familiar faces, like Gilles-Éric Séralini, the lead author of the highly discredited "long term toxicity of Roundup" paper and Mike Adams, a man who believes that the nerve agent sarin is used in water fluorination. However, unlike other anti-GMO documentaries I've watched in the past, this one turns up the anti-SCIENCE to eleven.

By far one of the more hilarious, stupid and demonstrably incorrect comments in the documentary came from a Dr Rima Laibow, MD. According to her website she is a graduate from Albert Einstein College of Medicine and for the past 35 years has been promoting drug-free, natural medicine. However, after reading some of the outrageous and potentially dangerous claims on her website (like "nano-sliver will stop HIV), I question if she even has a basic medicine or science qualification. It also seems that she is aware of her own bullshit, as her website comes with a disclaimer saying that none of the advice given is intended to "diagnose, prescribe for, treat or claim to cure, mitigate or prevent disease conditions".

In the documentary Rima begins to talk about why scientists modify an organism’s genome. She states that “95% of all the genetic modifications are done in order to allow the plants to survive more chemicals being sprayed on them and to allow the animals to survive more drugs being put into them”. This is simply incorrect. Scientists have modified the genome of plants for a whole host of reasons, including resistance to viruses, resistance to pests, higher yields and not just the ability to be glyphosate tolerant. Rima also seems to be unaware that there are currently no GM-livestock on the market and those being developed have been given traits like the ability to mature faster, rather than the ability to “survive more drugs being put into them”.  As hard as I have tried, I have been unable to locate where she got this figure of 95% from and can only surmise that she made it up on the spot.

Rima later went on to say one of the most jaw-dropping, unintelligent statements I have ever heard, which again makes me question her qualifications or the standard of graduates from Albert Einstein College of Medicine.

Whenever I am presented with something as idiotic as the stament above I always find it hard knowing where to start. It was so demonstrably incorrect that even my friend (who I watched the film with and has no scientific background) burst into hysterics at the thought of people having the magic ability to incorporate the DNA of what they have eaten into their own genome. We all know this to be incorrect, because if you eat a carrot, you do not gain the ability to synthesise carotene and turn orange. Considering GMOs are so widely used in America, you would think she would not have a problem talking about an example of this happening in the past or the mechanism of its action but she never does; she simply expects us to take her word on it. For this to somehow work in humans, the DNA from the GMO would have to survive being denatures if cooked. It would also have to survive nucleases from both the plant/animal cells and those within a human gut. On average, less than 5% of DNA survives beyond 7 hours after ingestion. The DNA would then need to pass (intact) though the gut, into your cells (without any help from any proteins) and somehow be spliced into every one of your cells’ genome. In short, it’s impossible and also FYI Rima, weeds don’t generally eat other plants.

So in conclusion, the documentary has shown the calibre of the people behind the alarmist anti-GMO movement. By getting such basic science incorrect, it is an insult to people who have legitimate concerns about the technology and some of the companies involved. It is also a joke that the maker calls Rima Laibow a “leading” physician when she clearly knows nothing about the subject she is talking about. Although this article only focussed on a 50 second clip of the documentary, I can assure you that the rest of it is full of the same level of knowledge (or lack of) and fear mongering. It even goes as far as to say that the planet is on the cusp of the 6th mass extinction because of GM technology. If you have a reasonably strong tolerance for bullshit I would actually recommend watching this film, if only for the awesome rap at the end by a white man in his 40s who can’t remember his own lyrics.