About a month ago I published part 5 of my mini series debunking the AIDS denialist film House of Numers. In this video I was critiquing a short one minute clip where Liam Scheff was claiming that the paper 'Heterosexual Transmission of Human Immunodeficiency Virus (HIV) in Northern California: Results from a Ten-year Study'  was proof that HIV can't be transmitted through Heterosexual sex. Liam was not very happy with my video, and to silence my criticism, he filed a false DMCA against it, but removed it a few days later - presumably so his friends Martin Penny and the people at Knollege Matters LLC could file theirs. Over the next two weeks Liam constantly spammed my Facebook page with insults and legal threats. Below are snippets of just some of what he published which I think give a fair represention of what kind of person Liam is.

And when he is not insulting me online he is calling for others to do so. 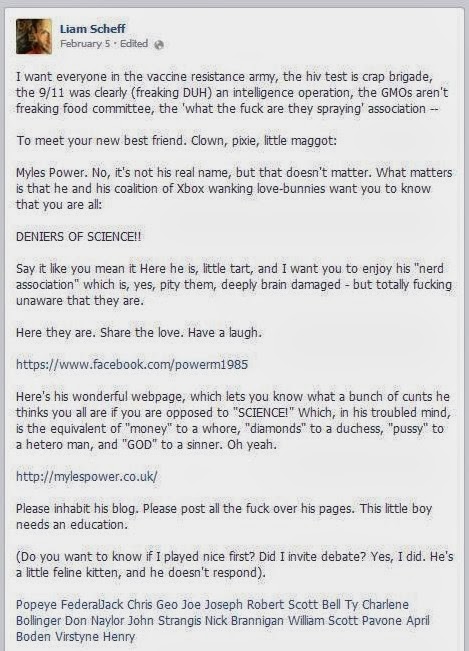 What a nice man