I have previously bashed the AIDS denialist documentary 'House of Numbers' in the past for, among other things, it's deceitful editing techniques. It quoted people out of context, chopped up dialogue to change the meaning of what is actually being said, and manipulated data. Even the foul-mouthed Liam Scheff who starred in the documentary admitted that he was unfavourably edited. So it will come as no surprise that I have yet another example of the director and star, Brent Leung, being deceitful in the editing room. This example however is a little different than others - where as before Brent was basically fabricating a narrative, here he has stumbled upon an actual real life conspiracy. It revolves around the very upsetting case of Joyce Ann Hafford which is also a perfect example of the potential dangers of some anti-retroviral medications. But rather than reporting about this now well-exposed story, Brent spins it into something quite different and rather confusing.

Joyce Ann Hafford was a 33-year-old single mother living in Memphis, Tennessee. She was pregnant with her second child when she tested positive for HIV. Worried that she would pass her infection to her unborn child she insisted in a clinical trial to try and prevent transmission. The drug being investigated was a non-nucleoside reverse transciptase inhibitor called Nevirapine. It works by binding to reverse transcriptase blocking the enzyme's catalytic site preventing reverse transcription from occurring. This is something that was missed in the documentary that gives the impression that Joyce and all who are taking anti-retrovirals take the same standard HIV medication. This is not the case as Nevirapine, like all drugs is not suitable for everyone and some people should never use it because of the risk of adverse effects, unless the benefit clearly outweighs these risks. These risk factors are investigated in clinical trials like the one Joyce was on. Her trial was designed to compare the safety of Nelfinavir and Nevirapine based antiretroviral treatment in HIV-1 infected pregnant women. The results of this study are published in the paper 'Maternal Toxicity With Continuous Nevirapine in Pregnancy: Results from PACTG 1022.

Nevirapine can cause severe, life-threatening liver damage, skin reactions, and allergic reactions as stated by Liam in the documentary. One of possible side effects which is truly terrifying is called Steven-Johnson syndrome (SJS) in which the epidermis separates from the dermis. The documentary heavily implies that this was the cause of Joyce’s death when it edited together a clip of her sister Ruby disguising a rash she developed, immediately followed by Liam talking about SJS whilst holding the paper ‘Nevirapine and the risk of Stevens-Johnons syndrome or toxic epidermal necrolysis‘. Joyce did not die as a result of developing SJS she died from drug induced hepatitis of the liver. It is baffling to me why a documentary that is trying to convince people to come off their medication would spin a story of a death resulting from one of theses medications into something different. The only reason I can think of is that SJS is so terrifying that they thought they could not waste this opportunity to frighten the viewer. It should also be noted that in the trial that Joyce was on, Nevirapine did cause one women to develop the syndrome…..so why did they not track her down and talk to her?

Whilst holding the ‘Nevirapine and the risk of Stevens-Johnons syndrome’ paper Liam says “When they are talking about a drug that can kill you, they are talking both a drug that targets the actively replicating cells in your durmus. In your mucusal layers in your intestine and stops them form working. What happens, goodbye skin”. Here Liam seems to be under the impression that Nevirapine is physically doing the damage to your cells. This is simply incorrect as SJS is believed to be an immunological disorder that can be induced by Nevirapine. The syndrome can also be caused by ibuprofen, penicillin and some anti-inflammatory drugs; all be it far less likely than it being induced by Nevirapine. If Liam was correct and the drug was targeting actively replicating cells in your dermis then why do only a small number of people develop SJS?

As I mentioned earlier, Joyce died from drug induced hepatitis of the liver, but what I did not mention were the errors that led to her death. While the documentary House of Numbers gives the impression that it was the simply the drug that killed her, the truth is that it was human error that led to her death. Whilst on the trial, and two weeks before she died, her blood work indicated liver problems – something that was already known as a possible side effect of Nevirapine. Instead of removing Joyce from the trial and off the medication, the doctors continued administering Nevirapine eventually leading to liver failure. It is more than likely that she could have survived if the doctors hadn’t been so negligent. This failure of the medical staff running the trial is unbelievably hinted at in the documentary house of numbers when Brent reads an e-mail exchange between Jonathan Fishbein and Ed Tramont. What the documentary was trying to achieve by this is a mystery. 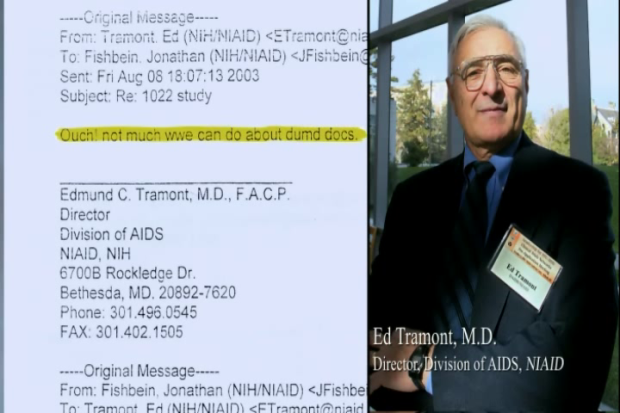 What is outstanding about this case is that the people running the trial tried to cover up Joyce’s death to her family and told them that she died of AIDS related complications. The family first learned of the real cause of Joyce’s death when the press obtained copies of the case files.

This story has everything that AIDS denialists are looking for, yet unbelievably they twist it into something it’s not by suggestive editing and by missing out critical information. Rather than telling the story of a group of doctors conspiring to cover up the death of a patient to their immediate family its been used to promote the idea that a different drug, AZT (azidothymidine), is dangerous. Joyce’s story in the documentary is separated into two parts, and sandwiched between these parts are testimonials of people encouraging people to come off AZT- even though this has nothing to do with what is being discussed at that moment in time in the documentary. In the end this is nothing more than a shameful example of capitalising on a very sad story of a mother trying to do everything in her power to protect her child from HIV.

4 Comments on The Sad Case of Joyce Ann Hafford