Back in May of this year on a particularly wet day League of Nerds co-host, James, and I attended a March against Monsanto protest in Nottingham. The protest was attended by a relatively large group of people who I presumed were there to protest against the agriculture company Monsanto. Instead it became apparent very early on that they were there to protest against genetically modified organisms as a whole. 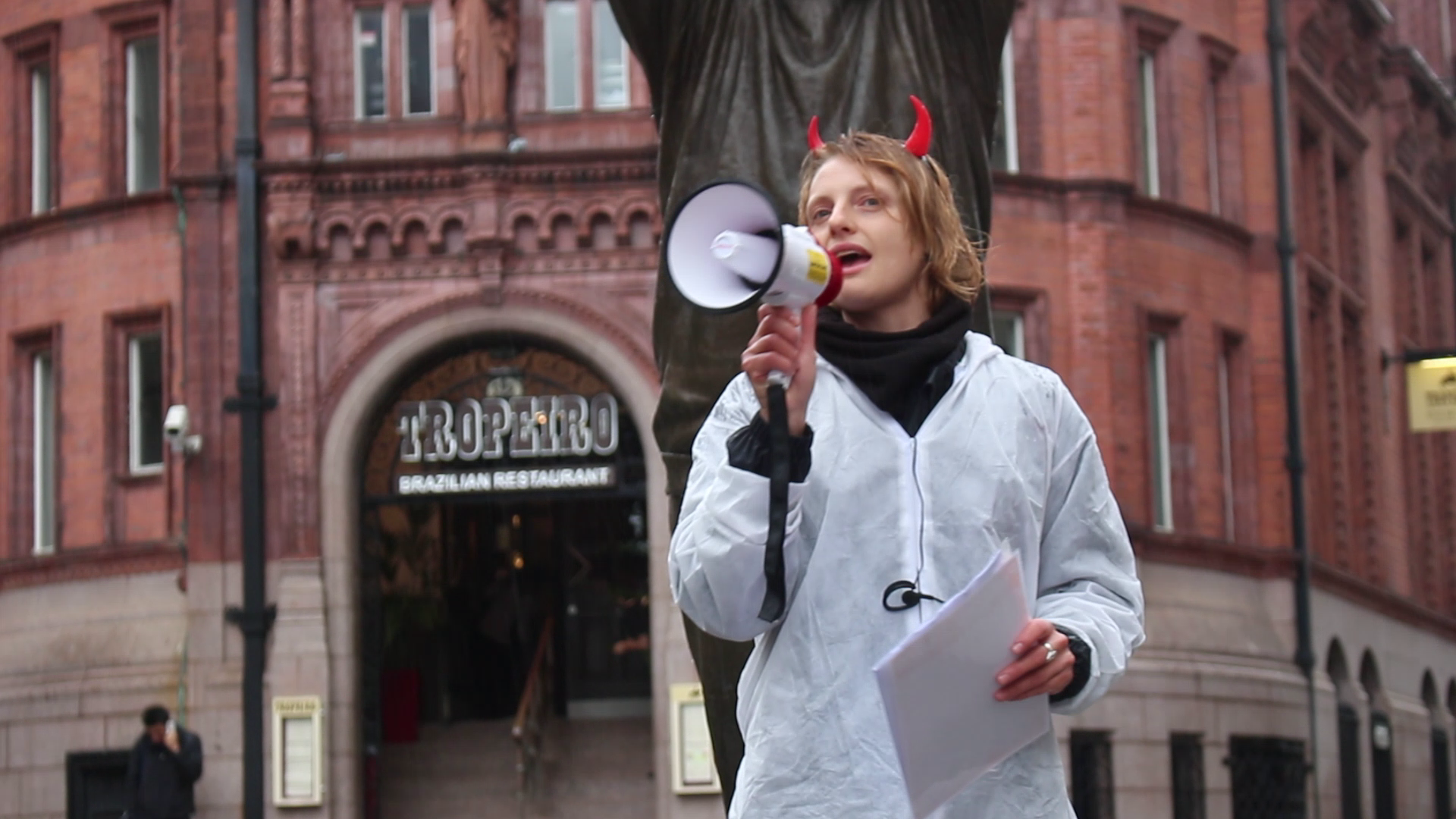 The main event began with a speech from one of the organizers who, for some reason, was wearing a full body painting suit presumably because she though it looked like hazmat gear. Stood there in the pouring rain with her painting suit slowly melting, she told the crowd that GMOs have been shown in independent studies to cause advanced ageing, damage reproductive organs, and that “it’s not the gene that is been put into the crop. It’s actually been shown to be the genetically modified process itself”. The protesters then took to street chanting “hell no! GMO!” before stopping for a short while to listen to some more speeches. One of these speeches came from the head of the Green Party in rushcliffe, Sue Mallender who unlike others was not only speaking for herself, but on behalf of her political party - The Green Party.

The speech Sue Mallender gave to the march against Monsanto protesters

Sue starts her speech by saying that the Green Party are the only political party against GMOs…as if their ignorance and arrogance is something to be proud of. As she was saying this I wondered if she would have a problem refusing a diabetic their insulin or preventing research using GM animal models that have the potential of saving millions of lives.

Later in her speech she mentioned a BBC4 radio program called Seeds of Trouble and went on to say that the program disguises how the people who lived next to farms growing GM-crops in Mexico were suffering from higher rates of cancers and birth defects. I was able to track down this program to a 2003 two-part series on the politics and science of GM food production. The shows are nothing short of anti-GM propaganda at a level that would make David SHUKMAN blush. What’s interesting is that there is no mention of a higher risk of cancers or birth defects. The only thing that comes close is a larger portion dedicated to a Dr. Ignacio Chapela controversial and highly flawed 2001 Nature paper “Transgenic DNA introgressed into traditional maize landraces in Oaxaca, Mexico”. The data within the paper was infact so flawed that Nature issued a statement admitting that they should not have published it.

After listening to Sue’s speech I had a lot of question for her and she was kind enough to let me interview her later on in the day.

Interview with Sue Mallender on her views on GMOs

My first question to Sue, which I though would be the easiest to answer, was ‘why are you against GM-food?’ Sue began to talk about how she does not like some of the companies who produce them. This is a fair enough point but it was not the reason she gave 30 minutes earlier when she said that GM-food has been shown to increase your risk of cancers and birth defects. I was really hoping that she would mention this again but presumably because I introduced myself as a scientist and someone who had worked with GMOs in the past she was a little worried to discuss it with me. She also mentions that some GM-crops have been given the ability to resist certain herbicides, which increases the amount of these herbicides used. When it was pointed out to her that this ability is not the only ability GM-crops can be given, she danced around the question and fell back onto anti-big company paranoia.

Towards the end of the interview she begins to talk about how she would solve the worlds food shortage problem without using GMOs. She believes that the worlds more affluent countries should switch back to using organic farming techniques and share their food with the less fortunate ones. Whilst I am not opposed to countries sharing resources, there will be places where this is practically impossible. How would we get food to them? Is the shipping not going to exponentially increase the price of the food? When this was pointed out to her she did what any good politician does and danced around the question. If she truly believes that this would end world hunger then calling her naive would be an understatement and she frankly does not live in the real world.

What was most worrying about the whole day was not that these people who turned up to protest GMOs did not have a clue about anything they where talking about. It was that they would most likely elect a person like Sue Mallender into power, who also does not know what she is talking about.