Forgive me for being so crass, but the best way I can describe the obsession of the natural health community with trying to link everything they find to be ‘unnatural’ with Autism is “same shit, different day.” Every month there seems to be a new piece of research doing the rounds that apparently shows one of these links and spits in the face of scientific consensus. This month is no different. Currently, there is a blog post called “Half of All Children Will Be Autistic by 2025, Warns Senior Research Scientist at MIT” going viral which references the (and I use the term very loosely…) research from a Dr. Stephanie Seneff, who claims that by 2025 one in two children will be autistic.

Dr. Seneff first appeared on my bad science radar when I was sent one of her papers a few months ago. The paper was called “Glyphosate’s Suppression of Cytochrome P450 Enzymes and Amino Acid Biosynthesis by the Gut Microbiome: pathways to Modern Diseases” and was published in Entropy. This is a very unusual place to publish, as the open access journal (which isn’t even indexed by Pub Med) seems to specialise in physics rather then biology.

Her paper claimed that there is a link between the herbicide Round-Up (glyphosate) and obesity, diabetes, heart disease, depression, autism, infertility, cancer, Alzheimer’s disease, etc. It seems to be throwing everything at the wall and hoping that something sticks, and is a perfect example of GIGO (garbage in garbage out). It even committed the cardinal sin of referencing the highly discredited Seralini paper. It also references autism research by the disgraced Andrew Wakefield and the highly questionable “leaky gut syndrome”. You can imagine after reading her paper previously, I did not have high hopes for what ever crap she was now spewing, but even I was surprised where she got the one in two children statistic from.

The original blog post that was sent to me had been published on the Alliance for Natural Health website and, by the time of writing this, had been shared on Facebook alone over 105,000 times. It had even made its way onto other sites including the hallmark of quality, Info Wars.

One thing this article is quick to point out is that Dr. Seneff is a research scientist at MIT. What it fails to mention is that she works in MIT’s Computer Science and Artificial Intelligence Laboratory, and has no medical or biological background. Instead, she has degrees in Biophysics and Electrical Engineering and a Ph.D. in Electrical Engineering and Computer Science. Whilst this, of course, does not discredit her work on the links between Autism and Glycophosphate, etc. it does say a lot about the author of the blog, who felt it necessary to include it in the title to claw at some unwarranted credibility.

The blog post quotes Dr. Seneff when she was one of the guests on a panel discussing GMOs at a recent conference. Apparently, she “took the audience by surprise” when she stated that “At today’s rate, by 2025, one in two children will be autistic.” It then goes on to quote fellow panelist Davide Gummper who talks about how the attendees reacted.

“All of the 70 or so people in attendance were squirming, likely because they now had serious misgivings about serving their kids, or themselves, anything with corn or soy, which are nearly all genetically modified and thus tainted with Roundup and its glyphosate”

Reading this for the first time, you probably got the impression that Dr. Seneff presented her findings at an academic conference in front of her fellow academics……but you would be wrong. The conference (if you can call it that) was not organised by MIT, Berkeley, Harvard, etc. but instead by Groton Wellness – a leader in whole body, all-natural health and dental care. For some reason back in June of 2014  they took it upon themselves to hold a gathering at their local school’s performing arts centre to discuss the dangers of GMOs. The poster for the event claimed that it was a “symposium featuring leaders in the field opposing Genetically Modified Organisms” but instead featured entrepreneurs trying to defend their various products.

The main beef of the blog post comes in the form of a graph correlating the amount of the herbicide Round-Up (glyphosate) applied to corn and soy with the number of children diagnosed with autism. The problem here is that if you have two variables that have shown an increase or decrease over time, with a bit of tweaking, you can make it look like there is a correlation. This is not to say that occasionally correlation does not equal causation, but in this case if there was indeed a link between Round-Up and autism rates, then you would not expect to see the same increases of autism rates in countries that do not grow Round-Up resistant crops – countries like the UK. 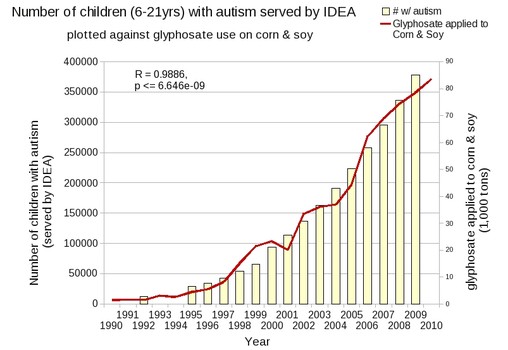 This graph also above also appears to be where Dr. Seneff made her prediction that by 2025, one in two children will be autistic. It seems that she simply assumed that both the rates of autistic children and amount of Round-Up used would continue to increase indefinitely, so came up with her magic number of one in two children.  This is shown more clearly in one of her slides taken from a talk she gave at the National Cheng Kung University.

I really wish there was more to stick my teeth into, but this is the beef of the blog. A one-off comment from a woman with no background in the field predicting the number of autistic children from a graph that she believes shows a correlation between rise in autism and uses of Round-Up that presumes that the number of children and use of Round-Up and going to increase indefinitely.

So in short, to answer the title of this blog post, will half the children be autistic by 2025? NO!