In 1998, the former medical researcher and gastroenterologist Andrew Wakefield published a paper linking the administration of the measles, mumps, and rubella (MMR) vaccine with the onset of autism and bowel disorders. In the 18 years since its publication, scientists have tried and failed to reproduce the paper’s findings and have discovered that parts had been falsified. This resulted in the paper being retracted by the publisher, whose editor-in-chief Richard Horton said that his journal had been “deceived” and that the paper was “utterly false”. It later emerged that Wakefield was paid to conduct the study on behalf of solicitors representing parents who believed their children were harmed by the vaccine and also owned a patent on a “safer measles vaccine”. He has since been struck off the UK medical register and has been barred from practising medicine in the UK. This is in part due to the fact that he performed unnecessary and invasive medical procedures on autistic children without ethical approval for his fraudulent paper. Yet, despite all this and the fact that his paper cast the smallest of shadows on the multi-dose MMR vaccine ONLY, it is now not uncommon to find parents who refuse get their children vaccinated FULL STOP.

Worryingly, a parasitic industry has developed parallel to the ever growing anti-vaccine movement, willing to sell them products that both feed and escalate their fears. Perhaps one of the more vile and upsetting products for sale is ‘Melanie’s Marvellous Measles’. A book that is, in my opinion, disgusting as it is marketed towards children and promotes the idea that vaccinations are ineffective and that children should actively try to contract measles.

The first thing that stood out about the book (apart from the horrendous cell shaded uncanny valley dead-eyed child on the front cover) is that its title is remarkably similar to Roald Dahl’s George’s Marvellous Medicine. As a child, I was a fan of Roald Dahl’s work and knew that he lost his daughter, Olivia, to measles before the introduction of the vaccine. I am of course not the first person to point out this similarity, but if the author Stephanie Messenger was aware of this connection, it does add an extra layer of vileness to what is already a horrendous book.

The story follows an unvaccinated girl named Tina who returns to school after the Christmas Holidays to discover that her friend Melanie is at home sick with the measles. It’s here in the first few pages that we are introduced to Tina’s teacher who happens to be heavily pregnant! This is a rather strange attribute for a person to have in a book that promotes children to actively seek a measles infection. This is because a pregnant woman is unable to receive the MMR vaccine, and becoming ill with measles can lead to miscarriage or premature labour. What makes this even stranger is that her pregnancy has no relevance to the plot, yet is mentioned multiple times. After thinking about this for a large amount of time, the only reason I can think as to why Stephanie paid so much attention to this irrelevant pregnancy is to unconsciously imply to the reader that this woman and her child is fine, despite presumably having been in contact with infected children. Put shortly, it’s to mock and defy the medical community. Or perhaps I am reading too deeply into this.

We are next introduced to two of Tina’s classmates, Jared and Travis, who look remarkably like me and my fellow co-host to The league of Nerds, James. At the back of the class they discuss Melanie’s infection and it’s here that we discover that Jarred is the book’s antagonist. We find out that he is the only one in the book who has been vaccinated, and he reacts aggressively on hearing that his friend is unvaccinated. 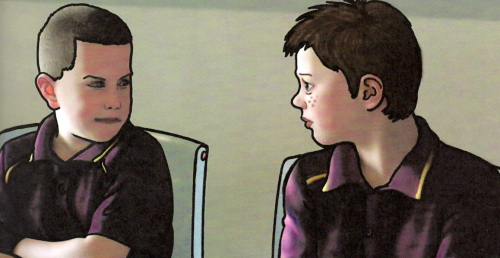 Some children in the class began to worry that they might catch measles and others were getting quite scared.
Tina heard Jared tell Travis, the boy beside him, that he wouldn’t get the measles because he had been vaccinated.
Travis said that he wasn’t vaccinated, but didn’t mind, until Jared then told him angrily, “Well, you’re going to die if you don’t get vaccinated.”
Travis thought about this for a minute and said to Jared “Well, I know that isn’t true because I haven’t had any vaccinations and I am still alive!”
Jared didn’t know what to say to that!

Perhaps Jared did not know what to say to that, but I do! The reason Travis has not been affected by any of the diseases that used to be common despite not being vaccinated is because of herd immunity. Presumably most of Travis’ classmates and the people who he interacts with on a daily basis have been vaccinated and are therefore immune, preventing the spread of infection between those who are not.. This is why vaccination uptake is so important – not only to protect those who are vaccinated but also to protect those who are not and can’t be.

The story continues with Tina informing us that her parents decided not to get her vaccinated because her brother, Sam, was “very sick after he had his shots”. I know this book is aimed at children, but I’d like to have known what exactly was wrong with Sam, but instead the book jumps the gun and declares vaccinations risky.

“This is when they decided vaccination was too risky, so they played it safe and Tina didn’t have any shots at all and she has been a very healthy child.”

Tina then returns home to tell her mother about her day and how her friend Melanie is off sick with measles. Surprisingly, Tina’s mother begins to convince her unvaccinated child that measles – a highly infectious disease with which complications occur in about 30% of people who are infected… a disease that was responsible for an estimated 2.6 million deaths in 1980… is a good thing! Tina, after being convinced by her mother, asked if she can go visit Melanie so she too can become infected. Upon arrival at Melanie’s house, Melanie’s mother says that despite being vaccinated against measles, her daughter still became infected. Here, the book brings up a good point – vaccines are not 100% and some who have had the jab may be susceptible to infection. One dose of MMR vaccine is about 93% effective at preventing measles if exposed to the virus, and two doses are about 97%. This is why it is so vitally important that those who can be vaccinated are – to help create this indirect protection for those who can still be infected.

Hoping to get infected, Tina spends the afternoon with Melanie yet miraculously is unaffected by this highly contagious disease. However, Jarred (the book’s antagonist), was not so lucky – despite, like Melanie, having been vaccinated, he came down with measles. Luckily for Jared, he has this junk food complete with “MSG enriched” crisps that are “GM-full”. This is so transparent it’s comical. 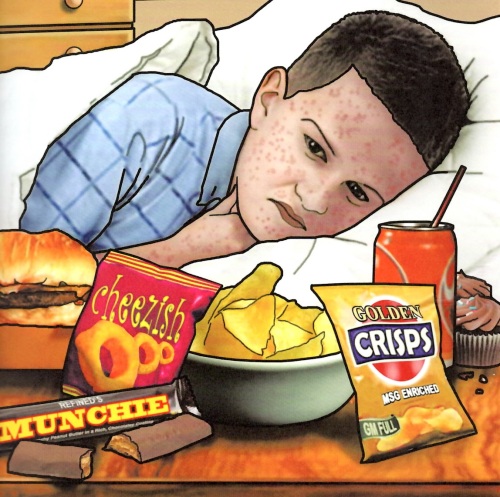 The book ends with Tina saying to her mother that she hopes to become infected in the future.

“Maybe I’ll be lucky enough to catch measles next time someone we know has them!”.

You are probably wondering to yourself ‘what does it take to push someone to write a book targeted towards children containing such dangerous information that has the real potential to maim if not kill?’ This question is answered at the beginning of the book where there is a dedication to Stephanie’s late son Jason, who she believes had died as a direct result of getting vaccinated. The truth is that getting a vaccination, like every medical procedure, carries risks and there have been a very small amount of people who have been harmed in the past. However, this is most likely not the case here. Stephanie’s son was diagnosed with a rare genetic condition called Alexander’s disease. This is a fatal neurodegenerative disease causing delays in development, seizures, and microcephaly – all of which is consistent with a blog post that Stephanie wrote about her son. Although I am somewhat sympathetic to Stephanie’s story, I still don’t think it’s any excuse to endanger the health of others, and would implore people who are worried about getting their children vaccinated to talk to their doctor.

This book has definitely earned its place on the dangerous side of my ever-expanding bookshelf of woo. I would like to say that I would never buy anything from her again, but I am a glutton for punishment – I can’t wait for a sequel to come out! Peter’s Perfect Polio, perhaps? What about Andrew’s Awesome AIDS? Or even Michelle’s Miraculous Malaria.

5 Comments on The Most Horrific Children’s Book Ever Conceived