If I were to ask you how many basic tastes there are, I would guess the vast majority of you would answer four. Bitterness, sourness, saltiness, and sweetness. And you would be wrong, as there is a fifth taste called umami.

The name umami derives from the Japanese word for “delicious” and, despite us all tasting it daily, was not discovered until 1908. The man credited with its discovery was Kikunae Ikeda, a chemistry professor working at the Imperial University of Tokyo. Ikeda noted that a Japanese soup base seemed to have a taste that was distinct from the four known ones and decided to isolated the compound responsible. He was able to extract and crystallise an amino acid called glutamic acid from the soup. Later research discovered that its carboxylate anion, glutamate, activates specific receptors on the tongue making it, indeed, a new taste. The taste itself is difficult to describe but is said to balance the overall flavour of a dish and enhance the palatability of a wide variety of foods.

It is theorised that we humans evolved to detect glutamate as a result of the advantages of eating cooked, aged, and fermented food. Prossesing our food in one or more of these ways would not only release glutamate but gives us access to more easily digestible protein and nutrients, and also provides access to probiotic bacteria, which help to maintain overall nutritional health, prevents disease, and fights gastrointestinal infections. Our ability to detect glutamate would therefore put us at an advantage and thus was selected for. This is why we crave umami tasting food and enjoy those that contain significant amounts of glutamate like cheese, meats, and mushrooms. Ikeda, realising the potential of this compound as a flavour enhancer, patented a method of mass-producing the glutamate sodium salt, monosodium glutamate (MSG). This salt has the added benefit of dissolving faster than the pure amino acid and has been used in cooking ever since. 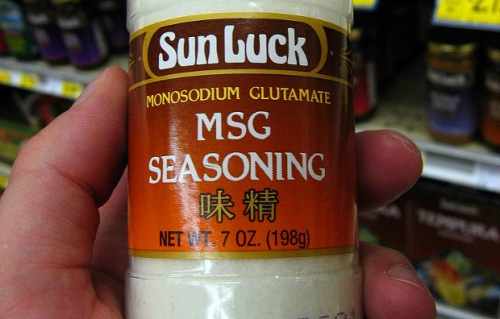 In 1968 concerns were first raised about the compound’s safety after a man named Robert Ho Man Kwok wrote a letter to the New England Journal of Medicine explaining that after he had eaten at a Chinese restaurant, he would develop hangover like symptoms. He believed that the MSG contained within his food was the cause of these symptoms and coined the term “Chinese restaurant syndrome”. Since then decades of research have tried and failed to demonstrate a relationship between MSG and Robert’s symptoms yet still to this day some worry about adverse effects of ingesting this compound. Don’t get me wrong I think there are valid ethical concerns in lacing unhealthy food with MSG to make them irresistible, but MSG is not responsible for the plethora of conditions it is been blamed for online.

As always the best source of these unfounded claims is Natural News who seem to be on a never ending quest to promote chemophobia to the world. Take, for example, the blog post “The truth about MSG and its addictive, neurotic side effects” which straight off the bat proclaimed that MSG has “escaped extensive testing because it is derived from an amino acid”. This is simply not true – MSG has been subjected to a plethora of controlled, double-blind, multiple-location clinical trials, all of which show that in the quantities you’re likely to be exposed to MSG, it poses no real risk. Yet despite this, the author copied verbatim a list of side effects of consuming MSG from a website called Organic Lifestyle who, in turn, got the list from a Dr Russell Blaylock. Blaylock is a retired neurosurgeon and author of the book ‘Excitotoxins: The Taste That Kills’ and believes that MSG causes nerve cells to become damaged, and eventually killed, by excessive stimulation. He also believes that that this MSG can trigger or worsen learning disabilities, Parkinson’s, Alzheimer’s, and Lou Gehrig’s disease. The only problem is that despite Blaylock’s intimidation credentials, what he is suggesting is not backed up in the scientific literature. Infact according to the paper “The blood-brain barrier and glutamate” entry of glutamate into the central nervous systems is restricted and there are mechanisms to forcefully oppose glutamate’s entry and promote its removal from the brain. On a side note, I discovered that Blaylock also warns against the use of the artificial sweeteners sucralose and aspartame and back in 2013 promoted the chemtrail conspiracy on Natural News radio, so he might not be such a credible source.

Next, the Natural News blog post goes on to say that “research has conclusively confirmed that consuming high doses of MSG causes lesions in the hypothalamus”. It took some time, but I believe i have finally tracked down the claim to the paper ‘Monosodium glutamate-induced brain lesions: electron microscopic examination’ . In the paper, lab mice that were injected with high doses of MSG did, indeed, suddenly form brain lesions. However, they were exposed to large quantities well above what the average person would be via a different method. Other similar studies where MSG was administered orally with food at similar high doses did not have the same toxic effect. In super high doses of MSG, the mice and ourselves will become ill but, as I keep saying, it’s the dose that makes the poison. And to give some perspective here, in mice the oral median lethal dose of MSG is over five times higher than regular table salt. What’s more, the danger is even less for us humans as mice are particularly sensitive to MSG.

No matter how you look at it, MSG in the dose you are exposed to is safe for human consumption. The author of this blog has brought nothing new to the table and has, instead, parroted information that has been corrected a thousand times before.

7 Comments on Some People Just Don’t Get the MSG