This is going to be my final blog post on the subject of the unethical “clinical trials” that took place in Uganda back in 2012. I have previously discussed how I came to find out about the “trials”, my attempt to get more information from the people involved, and how exactly they fooled people into thinking MMS can cure malaria. In this final blog, I would like to talk more about what physically happened in these “trials” and how the tests they performed still do not prove that they cured people of malaria.

I have to admit that, at first, I was really struggling to understand what exactly was happening back in 2012. This was because the only information I had to go on was what was presented in the video “LEAKED: Proof the Red Cross Cured 154 Malaria Cases with MMS”. This in itself is very suspicious because, if indeed these people had stumbled upon this novel cure for malaria that goes against everything we know about reality, then why would they not share one scrap of hard data with the public? The video and those who promote it would have you believe the reason is that this “research” is being suppressed by the powers that be, but in reality this “trial” was privately funded by a man named Klaas Proesmans, and he is one of two people preventing more information from being released. The second person is Leo Koehof who stole footage from Klaas of the first “trial” and uploaded it to YouTube. Leo, who has translated several books by the man who coined the term ‘MMS’, Jim Humble, unequivocally believes in the power of MMS and has no reason to hold back data other than the fear that if he were to release it, it would most likely be torn to shreds by people like myself.

Leo would later go on to perform at least one other pseudo-clinical trial in Uganda, which is practically identical to the first one by Klaas right down to it being recorded on video and uploaded onto YouTube. The only difference is that there is a lot more information about what was involved in these “trials” in the published video.

The video gives a detailed explanation, at least in comparison to the first one, about what actually happened. According to the narrator, the local people who took part were suffering from health problems and had heard about this up and coming “trial” on a local radio station. When they arrived they were first registered and received an initial examination to “determine their symptoms” and to “record their diagnosis”. Next, everyone was given an antigen-based rapid diagnostic test and it is assumed that, in this malaria-endemic area, they could accurately diagnose someone’s malaria status this way. As I previously discussed, these tests only detect the presence the Pf HRP-11 protein secreted by the parasite. This protein can persist in the blood after the parasite has been cleared, or has greatly reduced, giving a false positive. Put simply, these tests should only be used for screening and any positive result must be confirmed with an alternative method.

It does seem that for some a second rapid test was performed using a different brand. The one seen in the video is a Maleriscan Malaria P.f Antigen Test that is used to detect the presence of Pf HRP-11 and pLDH antigens specific to P. falciparum. However, according to the narrator this test is being used to detect if someone is infected with more than one strain of malaria, which it physically can’t do. There are only two explanations for such a catastrophic mistake – either the film makers are purposefully lying, or they were told this by people who don’t understand what they are doing. 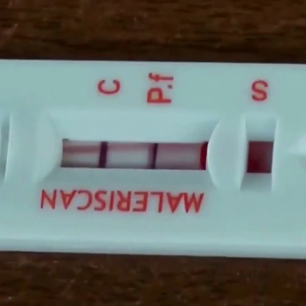 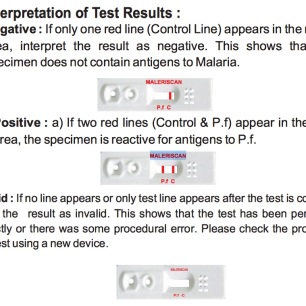 Next, those who tested positive using rapid screening test are sent to a lab for a blood smear. This second test is quite clearly being used to determine how much MMS to give to a patient rather than being used to detect false positives.

Those subjects who test positive for malaria are sent to the lab where they receive a second blood test to count the number of malarial parasites under the microscope and thereby determine how sick the patient is.

Perhaps the most damning piece of evidence comes soon after, when the narrators tells us that the lab were keeping their own records of the results. As he is saying this, the video pans towards a piece of paper containing the results of four people who previously tested positive using the rapid screening test. Out of these four, one of them says “No app set” – presumably meaning no appointment set up, however the other three say “No MPS seen” no malarial parasite seen seen. These people will be part of the 42% of Ugandans who are host to malarial parasites but have enough immunity to be protected from the malarial illness, but not from the infection. There is no mention anywhere of these people whose parasites levels are below the threshold in any of the videos and we can presume that at this point they were still treated as if they were malaria positive. I also think it is very telling that they wrote “seen” twice.

These people were then given a dose of MMS which I believe was based on this test result. Further evidence for this can be seen in the video where we the test results from someone who has miraculously been cured of malaria using MMS. We can quite clearly see that this person has been given 4 drops, which goes against what both the narrator says and the draft project description that Pepijn Van Erp obtained from Klaas, which states that they were to be given 18 drops. 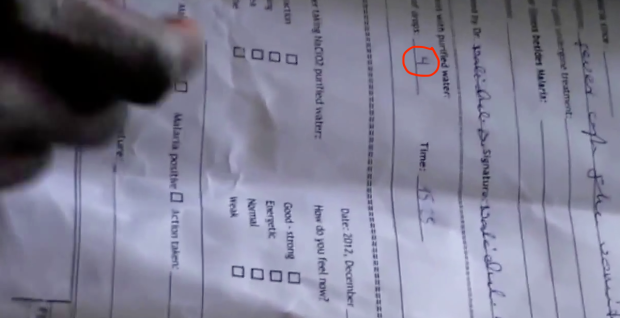 What is baffling is that in this second video, is that those who tested negative for malaria by the first test were told to go for a second medical examination and then, for some unknown reason, were also given MMS! Even babies were given this bleach for no reason!!! This is backed up by one of the Red Cross volunteers Kerstin Wojciechowski, who wrote a blog about the first trial, in which she said the following.

Tested negative or positive, people were given purified water which was prepared by Ronald, Enno and me. Thereby the amount of drops of water purifier varied by age and malaria status. After taking the purified water people were also given bottled water to take home as they had to drink a lot for the chemical to take action in the body.

According to the video, the amount of MMS given depended on your age and malarial status. Adults and children who were positive were given 18 drops and 8 drops respectively in a half cup of water. Those who tested negative were given a lower dose of 8 drops for adults and 2 for children. As you can imagine, the bleach (chlorine Dioxide) and other chemicals generated from the mixing of MMS (sodium chlorite) with a weak acid (in the second video they used citric acid) tastes disgusting, as I found out for myself. I made myself an MMS solution using 4 drops in approximately 200ml of water and immediately spat it out and ran to the bathroom to wash out my mouth from the tap. The smell and taste was overpowering and I was not prepared for how bad it would be. Once again, if we look at Kerstin Wojciechowski’s blog, people in the first trail had a similar reaction.

The immediate reactions after taking the purified water were worrying to me: People disliked the smell, taste and some children had to vomit. Unfortunately we had to tell people that these symptoms might carry on at home for the day.

The people who tested positive for malaria, and who were meant to get 18 drops of MMS, returned the next day and were tested again using the blood smear method. Of these 154 people (curiously the exact same number of people who tested positive in the first “trial”), 11 people still tested positive, however this (at least according to the video) was because they received too few drops of MMS. There is no evidence in the video that these 11 people ever received a negative result and it would not surprise me to hear that this was a flat out lie. What’s interesting about this small part of the video is that the audio has been edited and Leo’s voice has been put in during post.

But let’s just say that these people are correct and MMS does indeed have properties that make it useful in fighting malaria, it would still be wrong of them to say after one day that one blood smear test can confirm someone as malaria negative. P. Falciparum can hide in the liver and you need multiple days of no parasites found to prove that you have been cured. There is no mention of this in the video; nor are the people who have been cured suffering with any ill effects of having every malarial parasite killed. You would think that these people would be suffering anaemia or from the ill effects of having dead parasites floating around there system, but from the two videos, these people are apparently much healthier.

At end of the day, just as we know that every perpetual motion device is fake without looking into it, we know there is no possible way that MMS can cure malaria. Yes, we might come across incredible discoveries that change the way we look at the world, but we are not going to wake up one day and realise that the Earth is cube shaped. There is no possible way for MMS to cure malaria and, unlike most other snake oils out there, it poses a real threat because as I previously said, it’s an industrial bleach. With the people involved being reluctant to release any more information about the “trials”, we may well never know what really happened back then 100%, but I think I have clearly shown over the past few blog post that their experiment was so flawed that it shouldn’t be taken seriously.

One last thing before I go, I would like to thank those who helped me with my research on this project. Without their help, I do not think I would have made it very far in my investigations. In addition, a big thank you to Pepijn Van Erp for doing the initial leg work. If you have not seen his blog I suggest you check it out by clicking here.