The tactical herbicide Agent Orange, which was used in South-east Asia by the United States Department of Defence during the Vietnam War, was made from equal parts of the n–butyl esters of 2,4,5-T and 2,4,-D. For almost half a century, controversy has surrounded its use, mainly because it contained a highly toxic dioxin impurity (TCDD). Despite this impurity being thoroughly investigated, there is still a lot of confusion by the public regarding how it was formed and why it took so long to be detected. To answer these questions, you have to have a basic understanding of the synthesis of one of the herbicides precursors – once you have that, you soon begin to realise that what you thought you knew about Agent Orange may be wrong.

One of the biggest misconceptions that the general public have is that the dioxin impurity is exclusive to Agent Orange, when in actual fact it was the product of a side reaction during the synthesis of 2,4,5-T’s (the carboxylic acid, not the n-butyl ester) precursor 2,4,5,-Trichlorophenate. This means that any herbicides used during the Vietnam war that contained a derivative of 2,4,5-T will have contained a small, but substantial, quantity of this harmful impurity. Agents Green, Pink, and Purple, of which a combined total of 3 million litres was sprayed on Vietnam between 1961-1972, all contained 2,4,5-T derivatives and, therefore, all contained the dioxin impurity. 2,4,5-T was also used in domestic herbicides which too would have had contained trace amounts of TCDD.

This intermediate can be synthesised by the hydrolysis of a compound called 1,2,4,5-tetrachlorobenzene (TCB) in ethylene glycol using sodium hydroxide at 170-180C. The process in Nitro, however, was slightly different and methanol was used instead of ethylene glycol as a solvent, which had one major drawback; it had to be used under a fairly high pressure of 20 atmospheres.

The reaction formed small quantities of the impurity (about 1ppm) by the elimination of two molecules of HCl from two 2,4,5,-Trichlorophenates. However, if the temperature was raised this could increase a thousand fold, but the majority of the impurity was removed by the distillation purification process which gave a maximum concentration of 10ppb.

On March 8, 1949 a runaway reaction was taking place in an autoclave (a pressurised reaction vessel) used to synthesise 2,4,5,-Trichlorophenate at Monsanto chemical plant. The uncontrolled reaction increased the temperature and pressure within the vessel synthesising large amounts of the dioxin impurity whilst simultaneously exceeding the safety limits of the reactor. The increase in pressure caused a pipe to rupture, spraying a black powder and a thick, sticky, dark brown substance inside the building before eventually the safety bursting disk gave way, allowing the pressurised content to vent through a chimney.

Within an hour, workers were back in the building to assess the damage and to clean up. Few safety precautions were taken by those entering the building, who were unaware of the dioxin impurity present in the pre-purified reaction mixture which now coated the inside of the building. Soon after, the workers involved began to complain of health problems and started suffering from chloracne which is an acne-like eruption of blackheads, cysts, and pustules.

Chloracne is associated with overexposure to certain halogenated aromatic compounds known as chloracnegens, but is particularly linked with TCDD – so much so that it is considered a sign of exposure to this compound. For example, when the Ukrainian politician, Viktor Yushchenko, was poisoned in 2004, the doctors were able to deduce that it was TCDD after he developed chloracne, which left him disfigured. 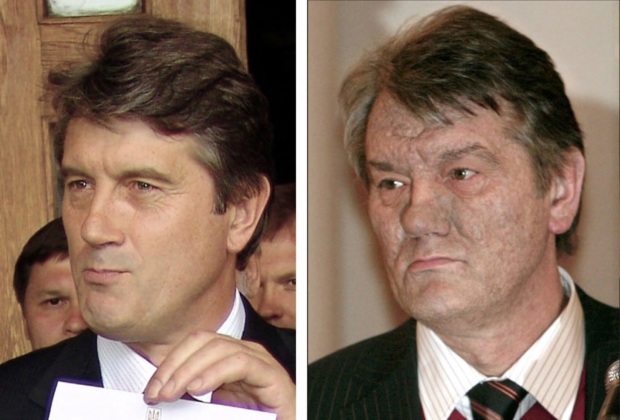 At this point, you should be asking the same question I did when I discovered this classic symptom of TCDD exposure. If this impurity causes chloracne, then why do so few who claim their ill health is a result of exposure to Agent Orange suffer from it? Don’t get me wrong, I am not saying that TCDD has no negative effects; nor am I downplaying these people’s suffering, I am simply pointing out that this established symptom of dioxin exposure is not seen in the majority of people who think the herbicide has caused them harm.

Believe me when I say that we have barely scratched the surface, and in the following blog posts I plan to discuss other industrial accidents and the long time health effects of those exposed to large quantities of TCDD and how they compare to those exposed to Agent Orange. I also plan to explain why the impurity took so long to identify, but for now I leave you with a quote by Arthur Conan Doyle.

“There is nothing more deceptive than an obvious fact.”

4 Comments on Agent Orange – Part Three – The Synthesis of 2,4,5,-Trichlorophenate