Miracle Mineral Supplement/Solution (MMS) is a 28% sodium chlorite solution in distilled water currently being sold online as a cure-all tonic. Once “activated” by an acidic solution, like citric acid, it generates chlorine dioxide – a powerful disinfectant that has been used in the past as a water purifier. Jim Humble, the man who coined the name and who is also the self-styled Archbishop of his own church (Genesis II), claims to have cured thousands of people using MMS of our most feared illnesses including HIV, cancer, and malaria.

When I first heard of MMS I was appalled because as a chemist I know that chlorine dioxide or any other chemicals found or generated using MMS have none of the properties Jim or his cohorts say. There is no possible way for these chemicals to specifically target any of the many things Jim is claiming they can and they will simply react with whatever they come into contact with. This can lead to some rather unpleasant side effects including nausea, vomiting, and diarrhoea. In higher doses, MMS can cause renal failure, haemolysis (a rupturing of the red blood cells), and even death.

Recently, MMS has been targeted towards the parents of autistic children. Kerri Rivera, a “bishop” in Jim’s church wrote the book ‘Healing the Symptoms Known as Autism’ in which she recommends not only giving autistic children hourly doses of MMS, but also advocates the use of MMS enemas. This can lead to the child passing fibrinous material and bits of intestinal mucosal.

Over the past two years, I have been producing content online warning people about the dangers of MMS and exposing these charlatans for the quacks they are. Recently, I investigated a pseudo-clinical trial that took place in Uganda, which apparently showed 154 people being cured of malaria using MMS. I showed, using their own footage, how they designed an experiment to get the results they wanted, and how there is no evidence for MMS’ magical properties. So, you can imagine my surprise when I recently discovered that the American television network CBS published a video in multiple states that spliced footage of me warning people about the dangers of MMS, making it seem as if I was promoting the use of this quackery.

The video and accompanying blog post titled, “Doctors Warn Against Consuming MMS To Cure Disease” were published on October 10th, two days after I published the video, “Exposed: Fake Ugandan Red Cross Medical Trial That Fed People Bleach”. The video starts off with a montage of YouTube clips from people who promote the use of MMS, as the narrator, a Dr. Max Gomez, tells us “They are singing the praises of chlorine dioxide, the active ingredient in some types of bleach. It’s also found in a product called Miracle Mineral Solution, MMS”. He then goes on to say, “But they are not using it to clean their kitchens they are drinking it”, as we are shown a clip from my video “MMS – Industrial Bleach Marketed as an Autism Cure”.

The video was a response to one of many comments I received, telling me that I was wrong in calling MMS a bleach.

Looking past the fact that I was calling chlorine dioxide, and not sodium chlorite, a bleach, this is a huge problem with trying to communicate the dangers of MMS to those who believe it is a panacea. So often, they dismiss those who highlight the fact that chlorine dioxide has the ability to whiten materials such as cloth, paper, or hair, making it a bleach, and something that you should probably not ingest.

The problem here really has to do with language. For example, methanol is an alcohol, but you would not call it alcohol because people would think you are referring to ethanol. This is the same with chlorine dioxide, which is a bleach, but you would not call it bleach because people would naturally think that you were referring to sodium hypochlorite (aka the stuff you can pick up at your local shop to clean your bathroom). This is something the CBS video not only failed to communicate, but also ended up reinforcing when it showed footage of household bleach in a shopping centre as it was talking about the compound.

To counter the angry comments and to show the bleaching properties of MMS, I acquired some on eBay and recorded myself using it to bleach a black sock.

Towards the end of the video, curiosity got the better of me, and I rather foolishly decided to try the concoction. I made myself a weak solution of MMS using 4 drops of 28% sodium chlorite and citric acid in approximately 200ml of water. I took a sip and immediately spat it out and ran to my bathroom to wash my mouth out with water. Although many people in the comments section have accused me of faking this reaction, the truth is that this was 100% genuine. I did not expect that such a small concentration would result in such a vile and overpowering taste that lingered for some time. This was the footage that CBS used, only they cut it just before I spat it out, making it look as if I was fine with drinking this woo.

At this point in the video, I was already annoyed and embarrassed that CBS completely misappropriated my content, but it was not until I saw my face for a second time that I decided to contact them and complain. The second clip comes from the beginning of the same video as before, where I was introducing MMS. In the footage they used, you can clearly hear me say, “This is MMS” whilst holding it up to the camera, but then my audio is muted whilst the video continues to play. The reason they did this was because the next words to come out of my mouth were, “It’s industrial bleach”.

Both the edit before I spat out the MMS, and one mid sentence in my introduction, are deliberate and calculated to make it look like I am a proponent of MMS, when I am categorically not. I am not sure why those working at CBS thought that it was acceptable to edit my footage in this way, and whether or not those involved were deliberately trying to damage my reputation, or were simply too lazy to find some more appropriate footage, but I was mad as hell. I wrote a short email to CBS New York informing them how upset I was about their video, and asking for an explanation as to why my footage was used in this way. A few hours later, I received the following. 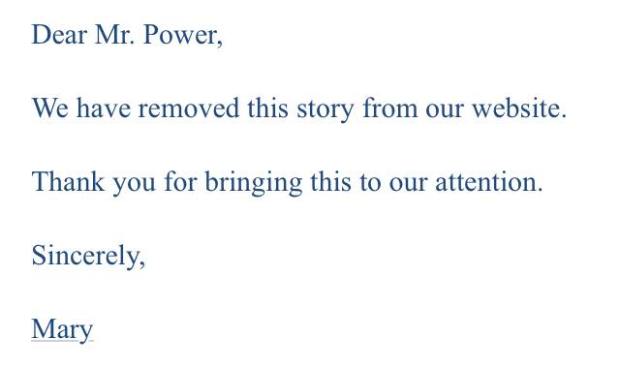 Although I was pleasantly surprised with their quick response, I was less than impressed with their lack of an apology, and that they decided to remove their video. Yes, I was extremely unhappy with how I was portrayed, but I believe that any video that sheds more light on this potentially lethal quackery is worth having, even if it comes at the cost of my bruised ego. For that reason, I decided not to complain to CBS Pittsburgh who are still hosting this video.